Recently I was invited to attend a wonderful weekend seminar on mindset & wealth creation. My good friend was going and I thought it would be useful and informative, so I signed up too. It was 4 days over a weekend and it had many good speakers talking about exactly how they used their mindset on their way to becoming financially free in Australia. One was the first civilian astronaut, another had precious metals trading business, and others were coaches and internet marketers with a wonderful lifestyle.

One evening the task was introduced: karate chop through a board with your bare hand. 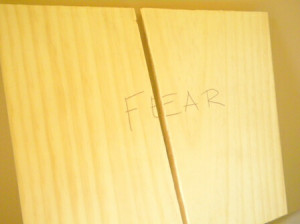 This was something I did years ago with an outdoor adventure training company employer. I enjoyed it then and learned the techniques to make it happen. Back then it took me a couple of goes at it, but with coaching I did it! It felt great and I was glad I achieved it, since I am lean and small boned.

So this time, I was mentally tired after a long day in seminars, and decided I could skip it and go home at a reasonable hour. Well, this was not meant to be. About an hour before the exercise began, they were explaining how to successfully break through the board. They gave the physical, mental and energetic instructions. Then they handed out legal disclaimer forms. During the weekend we had been organised into groups, and if I left early my group lost points. Wow, I felt so much resistance coming up. I didn’t want to do it, because I had already done it before! I wasn’t afraid, I just couldn’t be bothered. I didn’t feel like doing it, stop telling me what to do…all these mental voices came up. In those voices I suddenly heard people in my childhood, who I feel succumbed to those voices and never got over some limiting obstacles. That woke me up enough to realize it wasn’t my voice; it was subconscious, and I had a choice. I sat with my resistance for a while, still not signing the form. Then I did my own Energy work around releasing the thought “I don’t feel like doing this,” and -whoa – my voices changed into raw fear! Such strong emotion was coming up. My group members were waiting for me to say yes, and I said – nothing. (Very unusual for me). I was speechless in my internal terror, facing the idea that I had to do this for myself; yet I was feeling cornered. No one was insisting or even challenging me to do it. They were all excited. I let go of any resistance but was not committed to it. I was allowing myself to go through the motions as I observed without stopping myself. I signed the form, handed it in, got my board and wrote the name of the obstacle I wanted to break through – yes “FEAR” was the perfect word. I got in circles of people all lining up to do it. As I watched the young women have trouble breaking through, my anxiety came up again – fear of looking bad, not being right or successful, while everyone watched. The exercise wasn’t going to end until everyone in the room (over 70 people) were successful.

I pulled myself up mentally and finally took charge of my thinking. I realized that I had to do this physically and symbolically too – it represented unfamiliar fears that I was hiding behind resistance, ambivalence and “I already know this”. So I went to the SPEED Manifesting(TM) method and did a quick check through the steps:

1. Yes, I knew what I wanted: to break through that board powerfully the first time!

2. Yes, I imagined it and how I would feel about being successful. I had plenty of people in front of me to show me the way. I closed my eyes and pictured my board with the word F-E-A-R broken it two!

3. Yes, I stopped momentarily and became grateful to the seminar organizers for this opportunity and to the person who was going to be holding the board. He was so excited for each success and so encouraging. I could feel his want for our success.

4. Yes, I had become the observer in my thinking and watched my subconscious without resistance.

~ I was in line and suddenly it was my turn. Next I was handing the board to be held while the whole crowd was there looking at me. ~

5. Yes, I used their technique of speaking out loud “Yes, Yes, Yes” to get ready with the power of sound.

6. Yes, I took right action; I stayed the distance to do the necessary work; I took a moment to physically practice the movement as rehersal and I focused on a goal of 110% – not just ending at the board, but going through it and beyond.

7. Yes, I got the energy moving and I imagined bringing the energy of the Universe through one hand, down that arm, twisting and picking up speed through my chest as I gave it back through the board to the person beyond it.

I think he was as pleasantly shocked as I was that I split that board in two, first time. And he cheered me and my success just as I had imagined it!

I also noticed in that moment after it broke, that I was looking at what I had specifically imagined: the board break occurring between the F and E.

So what do you think about my success? It was wonderful to use the exercise to break through my hidden unlabelled FEARs. Especially since I could see that my fears sometimes look like apathy or non-interest.

I also, again had a quick and intense example of using SPEED Manifesting(TM) to create fast. And it still humbles me when it happens like this.

I am blessed that you share in my fun, my trials and my successes too. Thank you for being here now, with me.